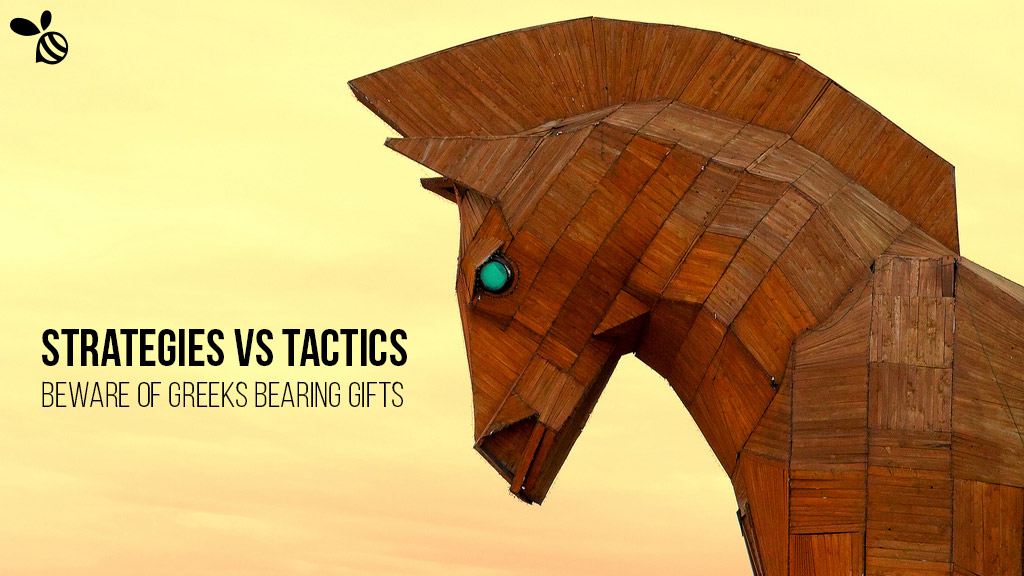 The “Trojan Horse” is a tale of strategy and deception.

The city of Troy was under siege for a decade. The Greek armies tried and tried to take the independent city, but they couldn’t break through the walls.

The Greek army, the most powerful of its time, waged attack after attack against the city of Troy. Think of the movie 300. The Spartans were the Greek warriors trying to break through these walls, and they were completely unsuccessful for 10 years.

Finally, after a decade of abject failure, the Greeks developed a strategy.

The Greeks constructed a huge wooden horse, and hid an elite squad of soldiers inside it. Meanwhile, the rest of the Greek army made a great display of breaking down their camps, and pretending to sail away.

The fleeing army left the giant wooden horse at the gates of the city of Troy as a “gift.”

The Trojans were initially skeptical of the outrageous gift. A priest named Laocoön argued the city should destroy the horse and famously said, “afraid of Greeks, even those bearing gifts.”

After much debate, the Trojans pulled the wooden horse into the city as a trophy. They believed they had won the war by standing their ground, defending their walls, and holding the Greeks at bay for a decade.

As we already know, that was a devastating decision. That night the squad of soldiers inside the horse crept out of the structure and opened the city’s gates. The rest of the Greek army — the ones who pretended to sail away — were waiting to pounce.

An effective strategy is the most important aspect of winning. For a decade, the Greeks demonstrated that tactics without strategy have little effect. This lesson is equally relevant today. When you put tactics first you can get mired in a stalemate.

The problem is tactics are a lot easier to grasp than strategy. Your team may feel productive as they implement marketing campaigns and tactics, but struggle to justify their impact or return on investment. The tactics seem to be working, but who really knows.

Just look at the number of companies wallowing in social media tactics that have absolutely no effect on sales, customer satisfaction, or brand awareness.

Putting tactics first is never wise. Your competitors are too smart, and they are constantly looking for an advantage. Your brand strategy is how you rise above the day-to-day hustle so that you can determine which tactics to employ.

There are dozens of marketing tactics that you can use to grow your business. The challenge is to avoid the pull of “what to use” or “staying relevant with technology,” and formulate a strategy.

Start with the first question for defining a strategy, “What do you want?”