How SPAM Got Its Name and How Its Meaning Changed 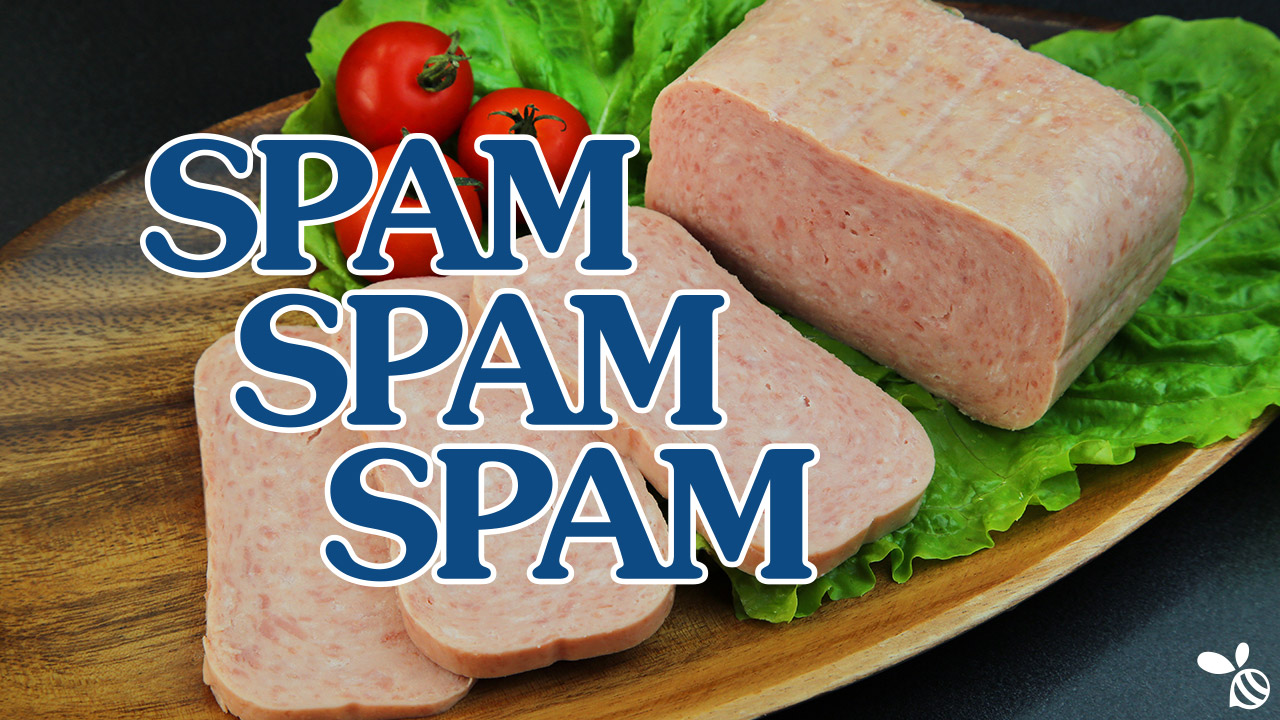 When someone comes to me for business name help, I often start with this example. Imagine that Hormel Foods, makers of SPAM canned lunch meats, is not happy with the current meaning of its name. SPAM has become synonymous with that crap clogging up your email inbox and social media feeds:

Spam calls and messages are the worst, but how did that name go from the title of a canned meat product to what it is now?

Where The Name SPAM Comes From

The origin actually starts with the lovable lunch meat, SPAM. SPAM is the registered trademark of Hormel Foods, and the name is always spelled in capital letters. 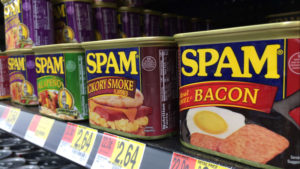 Hormel Foods introduced the wonder product in 1937. George Hormel wanted to increase the sale of pork shoulder, which was not a very popular cut at the time. He and his team tested a variety of products and came up with a versatile cured pork product. You can slice it, cube it, fry it, bake it, or eat it straight from the can.

Within a few weeks, the company had it’s iconic brand name. Kenneth Daigneau, an actor and brother of a Hormel executive, submitted the winning name. In his submission, he said the name was short for “spiced ham.”

Hormel paid Daigneau $100 for his creativity and for winning the competition. $100 may seem like a paltry amount, but that’s equivalent to almost $2,000 today. Not a bad reward for a public competition.

SPAM proved to be the perfect product for its time because fresh meat was expensive and hard to come by. The product was launched in the middle of the Great Depression and WWII started two years later. With its long shelf life and durable can, SPAM quickly became a staple for soldiers and civilians alike.

Within 22 years, Hormel Foods sold 1 billion cans of SPAM. In 2007 it crossed the 7 billion milestone and by 2012 it surpassed 8 billion.

I will confess, that I have never once tasted the product. The thought of it turns my stomach. 🤢 But by all accounts, SPAM was a wonder product. Nikita Khrushchev, Premier of the Soviet Union declared, “Without SPAM we wouldn’t have been able to feed our army.” British Prime Minister Margaret Thatcher referred to SPAM as a “wartime delicacy.”

How does a brand with such pedigree and history become synonymous with junk mail? For that, we have Monty Python to thank.

From Meat to Junk Mail

If you’re unfamiliar with Monty Python’s “Spam” sketch, spend 3 minutes and watch it. It’s a bizarre bit of comic genius:

The hook that gets stuck in your head is a group of Vikings singing, “Spam, spam, spam, spam. Lovely spam! Wonderful spam!” And an exasperated waitress shouts, “Shut up! Shut up!”

That nonsensical, repetitive song with someone yelling “shut up” became the metaphor for junk mail.

The origin of using “SPAM” and “spamming” to describe junk email originated in the gamer community. According to Brad Templeton, the name first appeared in the 1980’s with players of multi-user dungeons or MUDs. These games were precursors to massively multiplayer online games (MMOGs) like World of Warcraft.

He explains, “The term spamming got used to apply to a few different behaviours. One was to flood the computer with so much data as to crash it. Another was to ‘spam the database’ by having a program create a huge number of objects, rather than creating them by hand. And the term was sometimes used to mean simply flooding a chat session with a bunch of text inserted by a program.”

Many of the members of video game and nerd culture were also Monty Python fans, and everyone knew the annoying Spam song.

Like many great online trends, the term took on a life of its own. It broke free from the gamer community and became a popular term for annoying behavior in IRC (Internet Relay Chat). In every new communication technology — from USENET to email to social media — people abused the platforms with unwanted, repetitive junk messages. Each time, the term “spam” followed.

It’s like the Monty Python skit. When your inbox fills up with unwanted junk all you want to do is yell, “Shut up!”

It’s funny how an irreverent piece of sketch comedy from the 1970s repositioned a brand of lunch meats into a common phrase. Sometimes you never know how a brand name may evolve, and that’s the lesson. Someone could take your name, make a song out of it, start an inside joke that lasts for decades, and then finally the term can be added to our social vocabulary in a way the brand never imagined.