Trolling the Trolls: Wendy’s Is Killing It on Twitter 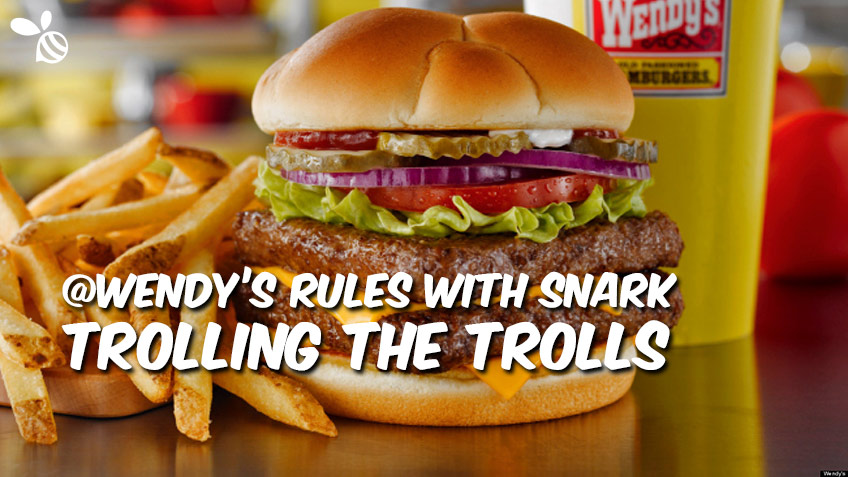 Wendy’s is killing it with snark. Pop over to @Wendys on Twitter, and you will find a brand that is pushing boundaries and having a blast. It’s absolutely delightful to watch.

At the start of the year Wendy’s posted a rather innocuous tweet:

Our beef is way too cool to ever be frozen. 😎 pic.twitter.com/QuXECJtlq5

Twitter user, Thuggy D, wasn’t having it. He wrote, “@Wendys your beef is frozen and we all know it. Y’all know we laugh at your slogan ‘fresh, never frozen’ right? Like you’re really a joke.”

At first Wendy’s was diplomatic. They followed the tried and true social media playbook and replied, “Sorry to hear you think that! But you’re wrong, we’ve only ever used fresh beef since we were founded in 1969.”

Thuggy D did what trolls do, he kept trolling, “So you deliver it on a hot truck?”

This is where it got interesting for me. Wendy’s went off the playbook and trolled the troll. It replied, “Where do you store cold things that aren’t frozen?”

@NHride Where do you store cold things that aren’t frozen?

It didn’t stop there. Thuggy D facing a challenge tried to bring McDonald’s into the fight. He wrote, “Y’all should give up. McDonalds got you guys beat with the dope ass breakfast.”

Wendy’s was now on a roll and dropped its final blow, “You don’t have to bring them into this just because you forgot refrigerators existed for a second there.”

@NHride You don’t have to bring them into this just because you forgot refrigerators existed for a second there.

Boom. Twitter exploded. Fans rallied around Wendy’s. This was a brand to watch.

@ItsZeemz We hear trips across the Atlantic are only kind of expensive. Get on the next plane.

Wendy’s exchange caught my attention, because they challenged convention.

Wendy’s fans and social media onlookers cheered the brand for its wit, but also because they challenged the assertion that the customer is always right. This wasn’t your average, safe corporate speak online. This was a brand with personality.

Using snark has its risks. Wendy’s could go too far. It could engage the wrong troll. It could lose control of the conversation. It could tarnish its reputation as a “family restaurant” brand. Wendy’s is walking a fine line between humor and bullying.

But this is the key lesson. Your brand is built at the edges. No one ever grows a remarkable brand by doing what everyone else does. Taking risks is an integral element of the brand building journey.

Buoyed by the positive response to its exchange with Thuggy D, Wendy’s is continuing to engage fans with snark. Fans are challenging Wendy’s, and the brand is gleefully engaging with them.

Mika asked, “@Wendys can you find me the nearest Mcdonalds?” Wendy’s replied with a picture of a garbage pail.

The Short One asked, “@Wendys Do you know of any good pick up lines?” Again Wendy’s came back quickly, “You dropped your name tag,” and included a picture of Wendy’s sugar packets.

Michael Kasberg wrote, “yo @wendys i have zero time for square patties. #pointless.” On point and filled with snark, “@ksbrg then how come you had time to write this tweet?”

@ksbrg then how come you had time to write this tweet?

We can keep going with examples. There are dozens of hilarious interactions. The take away is to enjoy the experience. A little humor goes a long way. A strong point of view always makes your brand more interesting.