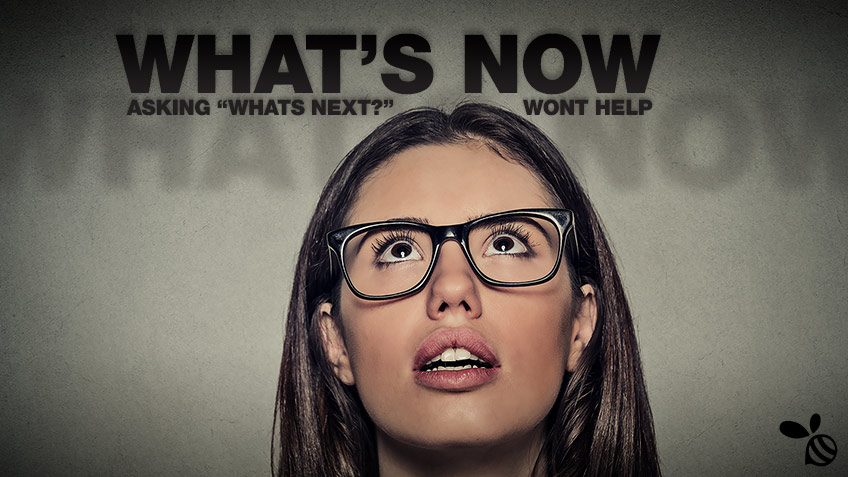 In a world of uncertainty, it doesn’t matter what’s next. All that matters is WHAT’S NOW.

Over the past few weeks I have caught myself asking, “What’s going to happen?”

I feel anxious about the political uncertainty in the United States and abroad, and how these changes will affect the economy (as well as basic rights and freedoms). I wonder about disruptive technologies, and what’s the next frontier with artificial intelligence and automation. I try to read the signs to determine my path to success, because everything feels chaotic.

The more I ask “What’s next?” the more I get sucked into the vortex.

Unaware of it, I created a daily ritual surveying all the major media outlets to figure out what’s happening. I look to the left, the right, and a few points in between. I don’t trust any source on its own so I look at everything. But this is a colossal time suck that only amplifies my unease.

Yes! That’s exactly how I feel. And it’s not just with politics. It’s with technology, business, and the economy. Everything is amplified in a way that forces us to fixate on “what’s next?”

WHAT’S NEXT does not matter! All that matters is WHAT’S NOW.

WHAT’S NOW is the mantra. It’s not just a question, it’s a call to action:

These questions apply equally to your life and work. You have today. You have opportunities and challenges. You can make choices. “What’s now?”

Yes, you can fixate on the future and what may (or may not) happen, but that’s another form of procrastination. The media wants your attention. Every moment you spend stressing out about things outside of your control is a wasted opportunity. You have the power to make a real difference right now.

The actions you take now will impact your future. Pick up the rallying cry, WHAT’S NOW!

Get weekly emails with ideas, stories, and best practices to grow a Sticky Brand!

Jeremy Miller is a brand strategist and bestselling author. Over the past decade, Jeremy and the Sticky Branding team have profiled and interviewed hundreds of companies across dozens of industries to uncover how companies grow Sticky Brands. Jeremy shares his expertise as a writer, consultant, and keynote speaker. His blend of humor, stories, and actionable ideas will inspire you to innovate and grow your business and brand.